I knew that I wanted to be a writer after spending my pre-teen years publishing stories on a site called Wattpad. I would stay up for hours late at night to get new chapters out as my books gained thousands of readers. I attended Detroit School of Arts in my first year of High School where I studied Radio, Television, Film, & Theatre. Throughout my high school years, my knowledge of theatre became greater and I performed in over a dozen plays,musicals & independent films throughout the years. After graduating high school, I knew that I wanted to continue with theatre, so I decided to attend Texas Southern University for my undergraduate degree, where I continued performing and learning more about the craft of acting, lighting, set design, and sound design. It wasn’t until the semester I took a play-writing class that I remembered how much I loved writing. I wrote my first 10-minute-play and directed it for our annual play-writing festival, which helped remind me of what I always loved to do. Instead of being in the story, I wanted to create the story. My Journey studying abroad in Paris taught me about other forms and styles of entertainment, which I believe help influence intersectionality in my writing. As a writer I see the lack of representation of people like me in film, and I want to create spaces for us to be noticed for our talents while also telling our stories accurately. I want to tell the stories that often go unheard. This past winter, I took it upon myself to start that journey by creating my first short film about the coming-of-age era of a young Black woman: The film speaks of the struggle that Black girls often face, concerning rebelling against societal norms and finding their individuality. Thinking back on my journey reminded me of the advice I hear about parents needing to pay attention to their child's interests when they are young because it may be their purpose. I think, at one point, I knew what my purpose was, but I needed a detour to find that passion again.

Bath, London, Manchester
Production areas I would like to work in 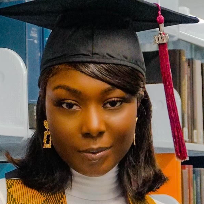